The Google Zeitgeist 2010 is out now!

The annual Google Zeitgeist always provides an interesting conclusion to the year, as we uncover what phrases have increased most in terms of search volume, over the last 12 months.

The 2009 list demonstrated that the death of Michael Jackson prompted many people to Google the pop-star’s name, as the King of Pop headed up the table of ‘fastest rising terms’. The sheer volume of ‘Michael Jackson’ related search terms was so significant that he out-performed all other search phrases (including the phrase ‘Facebook’ which appeared in position #2) – despite having only half as much time to achieve this feat (MJ died on 25th June, meaning he only had 5 or 6 months to amass such a significant search volume).

This year, Jackson appears on the list of ‘Fastest Falling’ search queries, below the likes of ‘Susan Boyle’ and ‘Swine Flu’.

So who will top the Google Zeitgiest 2010?

But, no-one can argue with the fact that 2010 has principally been about 3 things: ‘Chatroulette’, the ‘iPad’ and unfortunately, Justin Beiber. 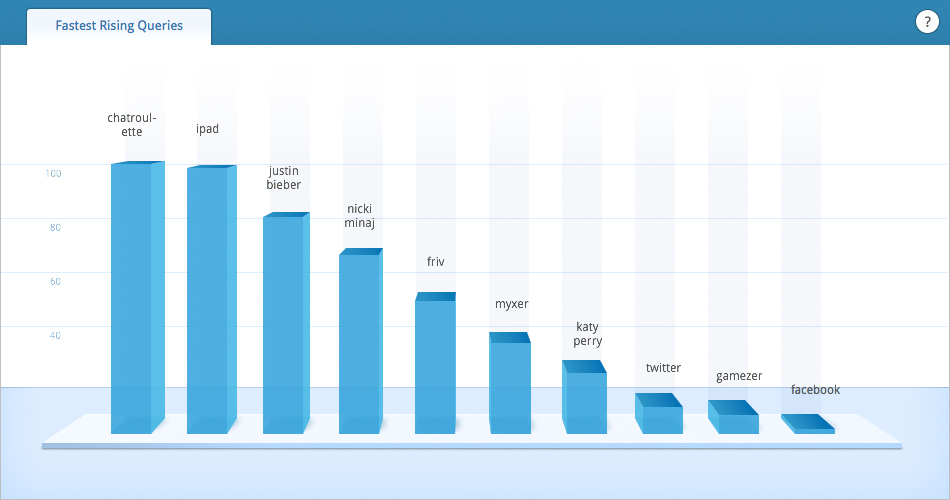 Chatroulette, for those of you who are unfamiliar with the name, is a Russian-based instant messaging service, which randomly pairs 2 individuals from different parts of the world, placing them in a conversation (either video, audio or text-based) with one-another. There has been a great deal of controversial content broadcast through the service, and it is thought that 1 in 8 ‘spins’ yields objectionable content. A number of celebrities have openly admitted to using the service including Paris Hilton. This may go some way to explain why ‘Chatroulette’ has been crowned as the fastest rising term this year!

As for the reasons behind the success of the iPad, well, it’s pretty self-explanatory. It’s a hugely popular, groundbreaking device, which launched this year. But, when it comes to trying to explain why ‘Justin Bieber’ is such a popular search term, we can only assume that the words ‘…is SOOOOOO irritating’ usually followed.

For a more in-depth look at the Google Zeitgeist, take a look over here.